Lex Schoppi was self-taught in the art of quick change when he began to specialize on the subject at the end of the 90’s. He studied his art with amazing precision until he reached perfection and ventured on stud trips to investigate the history of quick change.

With his specialist publications Lex Schoppi contributed significantly to the popularity of quick change on the magic scene. In 2001 he wrote his first specialist article on quick change and already by 2003 his first book appeared at the FISM World Championships of Magic in Den Haag. In May 2005 he published his second book on quick change in the USA, which not only sold worldwide and was republished, but found its place on the day of release in the top ten best-seller list of magic dealers around the world. Today, four years later, it is still in the top hundred. International magic press and leading Las Vegas magicians recommend this book as a fundamental work of the art of quick change.

As a coach ad consultant Lex Schoppi advises magicians, television and show productions. In addition to three dozen different techniques, he has penned further inventions. Many of his ideas are available worldwide from magic dealers. During the world championships of magic in 2006 in Stockholm one of his creations was used in the „Best of Magic Gala“. His customer list reads like a „Who’s Who“ from the international magic scene. Even „Cirque du Soleil“ and Las Vegas magicians consulted the effects specialist for show costumes. Alongside television programs such as „World of Comedy – the best Comedians of the World“ or the Euro-TV program he has prepared for example for the hit star Helene Fischer for her solo tour, for comedian Maddin Schneider and many others. He was the creator of the Illusions in the opening ceremony of the german music award show.

Since 2006 he has been travelling internationally under the name of LEX + ALINA with 10 Haute Couture costumes. As the only woman in the world his stage partner Alina has mastered the costume change in one second whilst bound. The costume changes of LEX + ALINA are among the quickest and most difficult in the world. In November 2006 both artists appeared as the finale of the „International Stars of Magic and Variety“ gala show in London, 2007 they become the magic award „Golden Magica“ and 2008 and 2011 they are in Germany „Artists of the Year“. 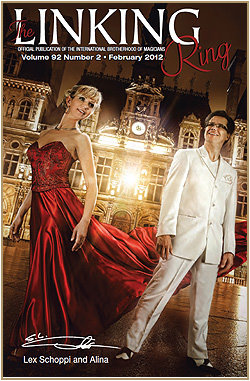