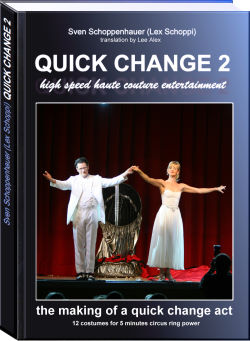 In this specialty book you will gain a deep insight into the complexity of creation from a complete quick change act. The latest technical knowledge flowed into this presentation and is elaborately described. Both the costumes and the props are described in detail. The techniques applied here are hard-core and allow the speediest costume changes “par excellence”.

Background: At the end of the year 2008 Lex Schoppi & Alina created a television act which amazed a television audience of more than 10 million. Now Lex Schoppi has put pen to paper and allows the reader a complete insight into the complexity of the whole quick change act. You get to see the effects from behind the curtain and understand what really happens within seconds. Apart from the technical subtleties, the author goes into detail of the correct presentation of the effects described. You get to see how a complete quick change act of 12 costumes was developed, how the costumes work, exactly why they performed in that way and how the difficulties were overcome. The techniques described in this book allowed the split second costume changes seen in the legendary television programme to be performed faultlessly.

For order please visit our webshop:www.lexschoppimagic.com 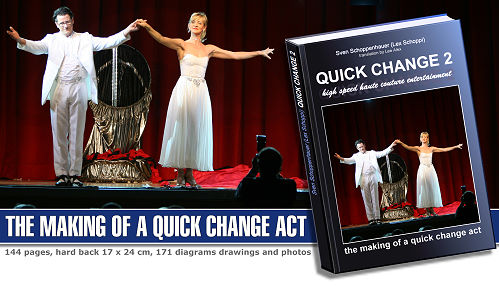 The high school of transformation

As an adviser to magicians I have always been pre-occupied with the subject of “Quick Change” and fascinated by this profession. It is one of the most intriguing, and thus one of the most sophisticated forms of art. Compared to other genres of magic there is surprisingly very little literature on the subject. It was a real sensation when Lex Schoppi published his first book “Quick Change” in 2003. His English language book “Quick Change” triggered a world-wide hype in 2005. With his new book Quick Change 2 Lex Schoppi bestows upon us a glance at his distinguished vestments.

This book should only be published in strictly limited numbers; the knowledge contained within is so valuable! All the nuances and ruses which the quick change artist has been diligently working on in the past year are served to the reader on a silver platter. The book describes the techniques with reference to a television project and permits a thrilling glance backstage. It becomes clear how much effort, time and money it costs to bring a quick change act on to
the stage, one which appears lively in performance and is able to inspire with amazingly quick costume changes. From the possible covers, the selection of the correct materials, about the choice of the best tear-away seams, right down to the savoirfaire in the staging, Lex Schoppi
explains everything in this book. And I really mean everything!

For everyone who wants to put together a professional act with costume changes, this book is a must.

George Diamond, Quick Change Artist
I’m reading the book right now and I think that it is the greatest book on quickchange there is!!!! It covers everything one needs to know to have a good quickchange act! I’m glad to see that it is not only about the standard techniques used in the Art of Transformation, but it also contains numerous improvements and excellent new ideas!!! And I’m looking forward to using some of them in my act!

SAVE YOUR COPY TODAY

WHO SO EVER FLIRTED WITH THE IDEA OF A SPLIT SECOND COSTUME CHANGE HAD TO FINDOUT THE HARD WAY THAT THERE WAS HARDLY ANY SPECIALIST LITERATURE ABOUT TRICK COSTUMES This german book about costume change techniques for men points beginners in the right direction. The first 40 pages are intensively dedicated to the different techniques. The user is trained in 22 sequences to accomplish costume changes. The combination of individual sequences results in very fast complete costume changes. This is described through six examples. The second half of the book concerns itself with special preparations, aids and multiple costume changes. Finally a multiple costume change with six costumes from preparation and through the handling is presented with a series of 48 photos. However with this book the author cleans up an old prejudice by also attesting to the „magical user“ that the most complicated technique does not necessarily have to be the quickest. The user is not only presented with the ability to perform split second costume changes with various articles of clothing – whether it be a janitor’s costume, a dinner jacket or a tails costume. Even the split second change of a tie or a shirt are explained. The author, grandson of a magical performer, has been performing magic himself since he was eight years old. He turned an initial annoyance at the lack of literary material on the subject into a drive of research. Without the use of expensive special costumes, this art is presented in a new fashion. Magic Magazine „Magie“ : … A top book for the newcomer and people with an interest, which is really worth reaading right from the preface! …the trustworthiness makes this book valuable… Why wasn’t this book around ten years ago? Magiec Magazine „Magische Welt“: An important, well constructed book… … the contents of which is absolutely recommendable! Magic Magazine „Zauberkunst“: With this new publication the author closes a gapin the libraries of magical speciality literature. GERMAN EDITION 80 Pages Paperback Softcover (21cm * 14,8cm)