Welcome dear friends in magic. Long time ago I send my last newsletter. I hope you remember me. Today we offer our new webshop with exclusive books and products by Lex Schoppi. International magic press and leading Las Vegas magicians recommend by book as a fundamental work of the art of quick change. The magic circle of Germany awarded me for „author of the year“ in 2010 for my quick change books. We have a special offer for all quick change books now: 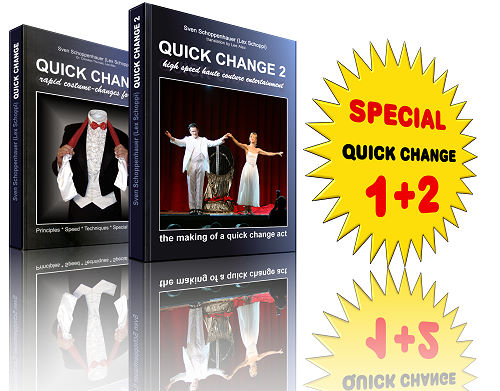 „QUICK CHANGE – RAPID COSTUME CHANGES FOR MENNever before has there been such an extensive treatise on the subject. 4 LESSONS, 7 CHAPTERS, 15 SECRETS, 112 PAGES, SEVERAL HUNDRED combination possibilities for Quick Change methods.

QUICK CHANGE 2 – THE MAKING OF A QUICK CHANGE ACT This book describes a complete Quick Change act with 12 designer costumes – female and male. This book will allow you to perform sensational costume changes at an unbelievable professional speed. 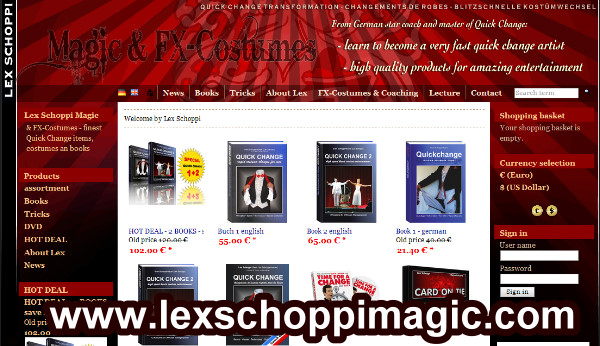 As a coach ad consultant Lex Schoppi advises magicians, television and show productions. In addition to three dozen different techniques, he has penned further inventions. His customer list reads like a “Who’s Who” from the German show-scene. Alongside European television programs such as “World of Comedy – the best Comedians of the World” or the Euro-TV program he has prepared for example for the hit stars and rock stars stars for her solo tour, for top-comedians and many others. Lex Schoppi was the creator of the Illusions in the opening ceremony of the german music award TV show.

With his specialist publications Lex Schoppi contributed significantly to the popularity of quick change on the magic scene. International magic press and leading Las Vegas magicians recommend this books as a fundamental work of the art of quick change. The magic circle of Germany awarded Lex for „author of the year“ in 2010 for his quick change books.

Lex Schoppi – the cartoonist and illustrator. For the magazine Magischee Welt (German language for ‚magic world‘) he created magical world since early 2010 cartoons for the respective columns. Schoppi Lex’s cartoons are drawn by hand and digitally colored. The final image is printed on high quality canvas or Dibond. Lex’s Schoppi includes gallery of famous magician magician currently several dozen – and growing. Some cartoons can be found right in the navigation bar. Lex Schoppis most extensive work was a comic book, for which there is even a Treaser. Follow this link and have fun with our last cartoon about the EMC: