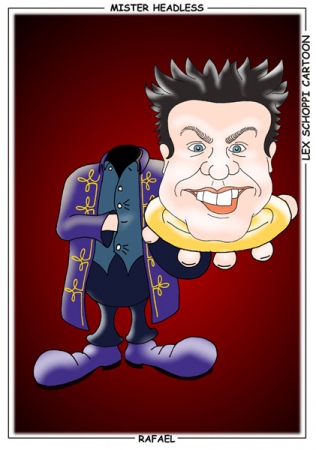 I call this drawing
Mister Headless.

See the Belgian magician Rafael in this picture. This cartoon has been published in/for the journal Magische Welt 6/2011. He is printed there cut in the middle. After all he is internationally famous for cutting ladies. There is so much to say about Rafael, but the simple statement that he does a good job conveys everything. Hardly any range of magic, he did not get into.

He is one of the most creative magicians and innovator of the magic scene. His trademark is the woman saw in two on the sofa or the self beheading, which can be seen in my cartoon.

I have already had the pleasure to perform with him on stage. A wonderfully kind colleague.

This cartoon has been published in/for the journal Magische Welt 6/2011 (subscription available). You will find a most interesting interview with him and much, much more of course.

Rafael can also be found in the internet: http://www.rafael.be/ 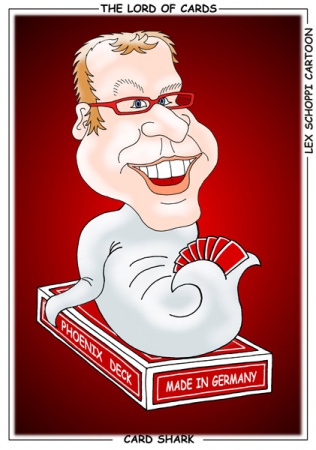 I call this cartoon The lord of the cards.

See the card shark Christian Schenk in his lunchbreak on the 52 cards, that mean the world to him. The card shark is one of the most successful German young entrepreneurs among the magic entertainment suppliers. He produces playing cards.
But how to make a living from that?
That`s easy. Just be the best there is! If this is true? I don’t know, as I do not care so much about cards.
But if we credit the rumor of those, who exercise card stunts with his products every evening, he is supposed to be the best.
Lately the lord of the cards acted as coverboy for the legendary journal ‘Magische Welt’ and I had the pleasure to draw him.
It seems natural to let the cardboardlord slip into the self picked skin.
Whilst other magicians wear tailcoat, the puristic shark is content with the essential, his card stack.

This cartoon has been published in the trade magazine „Die Magische Welt“ 5/2011 in fullpage, so that you can cut it out. Furthermore, you will find a very interesting interview with him – and much more.

Find out more about card shark in the internet : http://www.card-shark.de

Liu Chien at the EMC

I call this cartoon
Mister Miracle

See the currently most famous magic artist of the world. Billions of viewers saw him in several TV specials live on TV. In summer of 2011 he was invited by Luis de Matos to his elite club.

The EMC (Essential Magic Conference) is an annual meeting on internet TV for important and famous magicians. Magicians that Luis de Matos considers to be important and famous, to be exactly. Most often the participants are the same. Last time, 33 magicians sit there in front of the cameras, watched each other enchanting and talked a lot. Some of them just talked. One of them even showed a film of his performance. It was kind of film in which the actors are also sitting in the cinema and also watched a film. That’s cinema at its best. Applause, applause!

Liu Chien has also been invited there and showed his ACAAN routine. He performed it without hands and locked-up in a delimited area. You could nearly hear the jaws of 32 magicians drop. Whilst billions of viewers hailed in front of their TVs, the best super-magicians called this routine on the EMC show ‘middling’.

Well, I really like it, therefore I created this cartoon: Liu Chien on the EMC with his ACAAN routine.

This cartoon has been published in the trade magazine Magische Welt 4/2011 in fullpage, so that you can cut it out. Furthermore, you will find a very interesting interview with him – and much more.

I call this drawing
The Lord of darkness

Well, any explanation is redundant. Everyone who does not know this magician really missed out on something. Dani Lary from France is one of the most successful illusionists throughout Europe. His international popularity is based on the TV show: ‚Le plus grande Cabaret du Monde’ which is broadcasted world-wide by TV5. Some Celebrities and the host Patrick Sebastien are sitting in a dinner-theatre at a table and chat. Each guest brings one vaudeville artist. This show is one of the most popular Saturday night primetime shows, similar to the German ‘Wetten, dass…’.

Dani Lary performs the final turn – usually an opulent illusion. Dany Lary has a soft spot on gritty comedy with tongue-in-cheek. He is always accompanied by his house elf Eric who helps him with his props and typically fools around.

I have depicted Dani Lary with his house elf Eric in this cartoon. The grandmaster wears classic tails, of course – in his case in the French national colours. Since it is a known fact that grand-illusionists do not bother about card tricks, he spears the ace of hearts with his blivet. The old castle is an allusion to his full-length illusion-show: ‘Chateau’.

I call this figure
The Hole Hunter

See the American magician Michael Weber! As a consultant, he worked for many Hollywood productions, as a magician he performs for the biggest companies, as a lecturer he shows magicians who is the dare-devil… and now he appears in the specialist periodical „Die Magische Welt“. Since it is me to create the caricatures for the aforementioned, you’ll find him, Mr. Weber, on the celluloid which means everything to him.

Find the salient point on the screen role – which is most probably the talking point in his workshops and catch sight of him climbing through the card. Which does not show the American Bicycle back: I took the liberty of furnishing it with the phoenix.

This cartoon appeared in the trade magazine „Magische Welt“ 3/2011. Find a full page ready to cut it out so that you can hang it up over your bed or behind the closet. Moreover, the journal offers a very interesting interview with him and tricks, tricks, tricks… of course.