I call this comic book ‚The Great Giant’

This satirical comic book caricatures the qualifying competition for the German Championship of Magic in 2010. The leading actor – ‚The Great Giant-, a star director of world fame, in the role is noted for: the magic interpretation of the opera swan lake.
He enchants in ballet slippers en pointe, in tutu skirt and tails, of course. Please pay attention to the passion for detail in creating the hat rack. The absolute highlight is the Quick Change tutu, which appears at the flick of a switch. This is the jewel in the crown of high tech costumes. The Great Giant presents his swan lake as opening sequence of the above mentioned event.

This international decorated show act of the ‚The Great Giant’ is from a magic technique point of view the absolute high point, quasi high end magic par excellence. The eagerly waiting conference audience especially arrived early to see this world act. What it looks like or how it ends can only be seen in the comic book. The world premiere is in Saarbruecken at the qualifying of the German Championship of Magic.
Trailer: For this comic I have created a small special trailer.

This glossy magazine is published in a limited edition at the qualifying of the German Championship of Magic competing for the golden bat. It is the first comic book issued by Lex Schoppi Cartoons.
Besides, Caricatures in good fun on the world in between was overdue. Please find detailed infos later here. The German Championship of Magic really exists.
Everyone interested in magic should visit it! 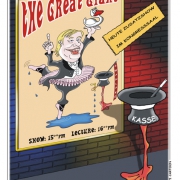 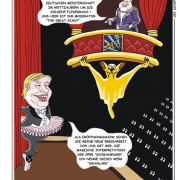 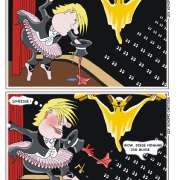 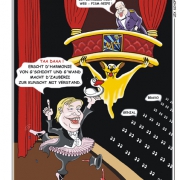 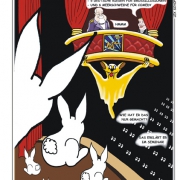 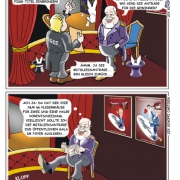 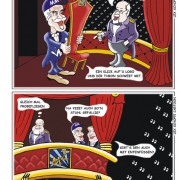 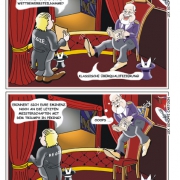 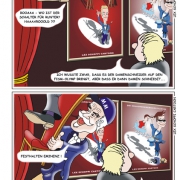 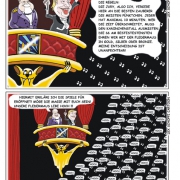 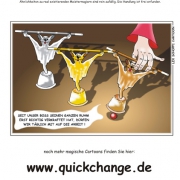 » all about the headquarter...